Fr. Eric Nielsen has been the Pastor of St. Paul’s since 2006 and a priest of the Diocese of Madison since 1995. The oldest of seven children, Fr. Nielsen grew up in Oshkosh, graduated in 1984 from the UW in Civil Engineering, and entered Mundelein Seminary in 1990. As a young man he enjoyed a lot of outdoor activity and travel but now spends most of his time at St. Paul’s encouraging students to focus on study and prayer as a path to know, love and serve Jesus Christ. 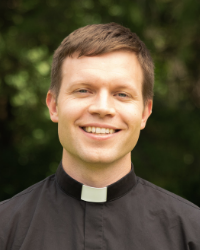 Fr. Luke Syse also grew up in Blanchardville, WI and attended UW-Madison studying Biological Systems Engineering.  He grew up in a Catholic home and thought about the priesthood at a young age.  It was at St. Paul’s where Fr. Luke discerned his vocation to the priesthood, entering seminary after graduation in 2011.  After two years of seminary in Detroit and four years in Rome Fr. Luke returned home and was ordained to the priesthood on June 30th, 2017.  He loves to play sports, especially basketball, and enjoys a good hike or bike ride in the great outdoors of Wisconsin.

Fr. Andrew was born on the east side of Madison and began to grow in his faith while studying architecture at UW-Milwaukee. During a year of work and discernment after undergrad, Fr. Andrew frequented St. Paul’s and ultimately decided to enter the seminary. Fr. Andrew has spent the last 5 years in studying Rome and he was ordained a priest on June 30th, 2017. He enjoys hockey, lacrosse, drawing, art, and anything outdoors.